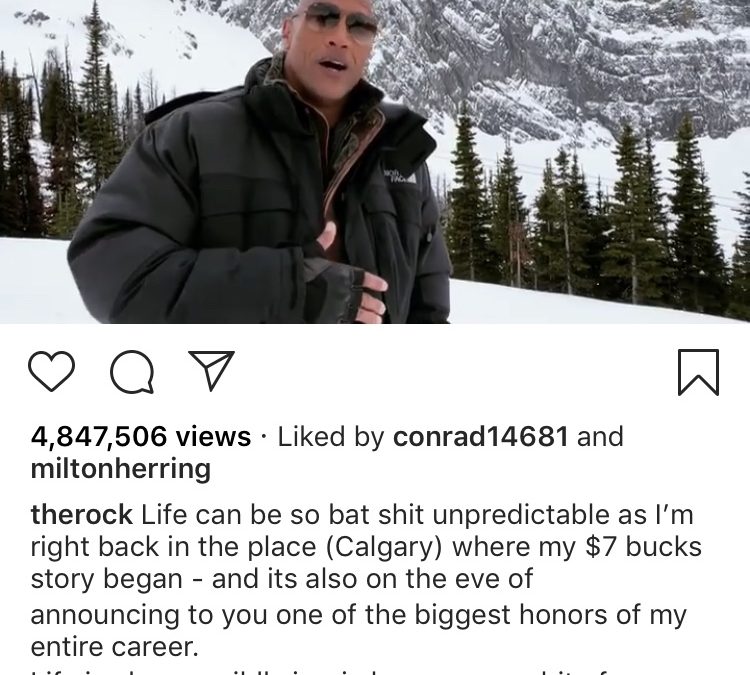 “The Rock” is better than you

I say this not for shock, but because it’s true. How dare I? Here’s the facts. You and your business constantly study social media analytics, but you’re not getting it. You agonize over how to create witty posts that create engagement, but the results aren’t there. If your endgame is a sale, you’re missing the boat.

During a recent chat with an up and coming motivator I broke down the problem with his social media strategy and mine. We yap about strategies, post frequency, and engagement, but we don’t get what “The Rock” already knows.

Dwayne “The Rock” Johnson is the real deal, authentic and ripped. Seriously though, Mr. Johnson allows his fans and supporters to be part of the journey. When he’s on a private plane he takes all 180 million followers on the flight. When he hits the gym at 4:00 a.m. we see the dedication. The guy is an open book so when it’s time for a Sunday cheat meal, he lets us have a seat at the table. Filming a movie, we’re behind the scenes. Every day he opens up his world to us, quiet moments with children, tequila tastings, and even red-carpet events.

“The Rock” is the perfect balance of coolness, promotion and authenticity on social media and the statistics don’t lie. I’m glad Dwayne Johnson was recognized as one of Time Magazine’s 100 Most Influential People in the World because he brought us along for the ride.

Dwayne Johnson is a Master of Marketing. Wrestling fans, sports fans, women, men, and even Tooth Fairy loving children all adore him. He lets us know where he came from, where he made mistakes and where he is today. He pushes projects, but we hardly notice. Not because it’s not there but because he gives so much.

Add Value – Give your following and viewers something original, interesting, and current. No one wants the same old cookie cutter content. Be interesting and don’t regurgitate the same stock imagery over and over

Humility – Even with loads of money, muscles, awards, and fans “The Rock” never forgets where he came from. Take us on the journey, sure you’re great now, but the public wants to see how you got there?

Look Good – “The Rock” has huge muscles, fine clothes, a big smile and cool tats. You may not be jacked or have a new Rolex, but you can always look your best.

Don’t Sell – Don’t treat your connections like cash registers. They know what you do, don’t shove it down their throats.  You’re building a relationship, so let it develop, don’t force it. Nobody wants an inbox full of DM’s with your special offers.

Connect and Be Social – Give a shout out, promote a friend. It’s not always about you, “The Rock” gives props to fans, musicians, old teammates, acting partners, and even his favorite wrestlers. Social media is not a one-way street, be social.

Use Video – If I picture is worth a 1000 words, video is worth a million. You’re not making feature films, pick up the camera and make it happen.

Step Up the Frequency – Post more, it’s simple. Social media is run by algorithms, so even if your content is great not everyone you’re connected with will see it.

Take Action – You don’t need editors and directors to post content, just do it. If “The Rock” has time to take selfies and create content, so do you.

Thank Everyone – Practice gratitude. Wherever you are and whatever you’ve achieved, remember you didn’t do it alone. Recognize those who’ve contributed to your success and let them know how much they’re appreciated. Dream Big – Start a company, win a championship, build a brand, or run for president. Set big goals and always invite your connections and following along for the ride.